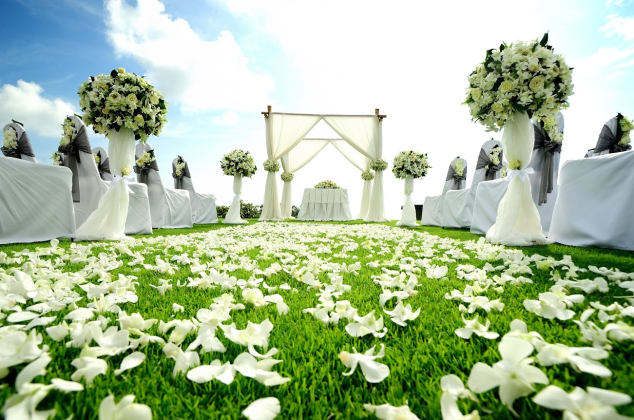 Wedding photography has changed over the last few generations. This is a combination of several factors, including the limits of the technology, the cost of photography and the expectation and taste of the public.

At one point there was a documentary look to photos. From early, bulky cameras to handheld 35mm models the photos had a staged, posed look. Everybody from the royal family to primary school children has to stand in neat rows and pose for the camera. Early photography involved skills with adjusting aperture and light; having a composed a set way of setting up photos meant there was far less to go wrong. There was also less variation and spontaneity.

Modern digital cameras allow an average person to take quite acceptable images; the digital technology will do a lot of adjustments for them. However, a professional will be able to do better than what the algorithm in the digital device allows. There are always artistic possibilities with contrasting shadows and light, something an automatic camera would falsely try to correct. The fact that a bride is often in white is enough reason to use a more advanced system and professional photographer; large white objects like wedding dresses are often falsely compensated for by digital camera algorithms.

Big bulky cameras that took boring long shots form the back of the room are long gone. So are poor quality 16mm film and uneven lighting (we hope). The shear bulk and weight of these cameras limited their use. Not interfering with the wedding (the photographer and videographer have to stay inconspicuous) only exacerbated the issue. Just being able to take the camera off the tripod made all the difference.

Modern video cameras are easily held in one hand. This makes it much easier for a videographer to capture a range of different angles. The image quality is much better too. The real trick to capturing a wedding is the art and skill in knowing what raw footage to record and how to make a coherent end product. This is why professional results are notably superior.

Many individuals can take a few images in isolation. But when it comes to making a continuous narrative, and a wedding video is a narrative, the task becomes much more difficult. Any film of a wedding must be a coherent whole, with each image flowing from the last. There need only be one poor join in a film and the result is ruined. A professional wedding videographer knows how to get the right raw footage and edit it in the right way to produce a film (or two) that is worth re-watching.

It is not uncommon for wedding video packages to include two video versions of the event- a short version for giving to the guests and other relatives, and a long version that lets the married couple re-experience more the day’s events. The low cost of DVD’s and duplication is another technological factor that has worked in the favour of filming these events

Skill for any art must be intuitive. But intuition is not instinct. An instinct is something we are born with; intuition is the result of accumulates knowledge with some sort of order. We have learnt from experience, we tend to know what works without having to think about it. Amateur photographers learn that you can’t just point and shoot to get good results; the object gets in the image but not in the right way. Strangely, professional claim they just point and capture the image; they don’t realize how much processing goes on unconsciously. Once something is grasped intuitively it is like speaking; we don’t usually consult the rules of grammar when we speak, we have learnt to simply say what we mean. Good photography is like this.

If you want those incredible wedding photos you will need to be well versed in these kinds of images; you need to know what works and you will need to know the location(s). Knowing what is at the locations will help on the day when you need to grasp images in a hurry. It will also help if you know some good backgrounds for the staged shots. After a while this will become second nature.

Get a list of images the bride and groom want. They will be impressed if you manages to get images that outdo their requests.

Do any research into classic paintings and you will see rough drafts and diagrams that divide the images up into boxes. Our brains see certain proportions as appealing, and value things like symmertry. If we see these proportions in images we tend to like what we see (though factors like lighting and colour are also important here); we are not consciously looking for it, we simply like the result. On the other hand this might be consciously put there by the photographer. Some modern cameras can overlay nine equally spaced boxes on the camera screen; they divide the screen into thirds both horizontally and vertically. Images that fit in with these boxes are off to a good start. Practice putting the desired image into this type of grid; you can use any part of the main subject, foreground or background to achieve this patterns. Then again, if an image looks great for no discernable reason, keep it anyway; it probably obeys some rule even if you haven’t figured it out yet.

The Hunter Valley has something for everyone; nice walks, great place for picnics, eating, relaxing, wine tasting and the scenic views. It is not surprising that weddings are commonly held here. Splendid Photography has extensive photography experience in the Hunter Valley as they capture the perfect moments; the backdrop of the wide and open landscape with the wedding couple as the focus.